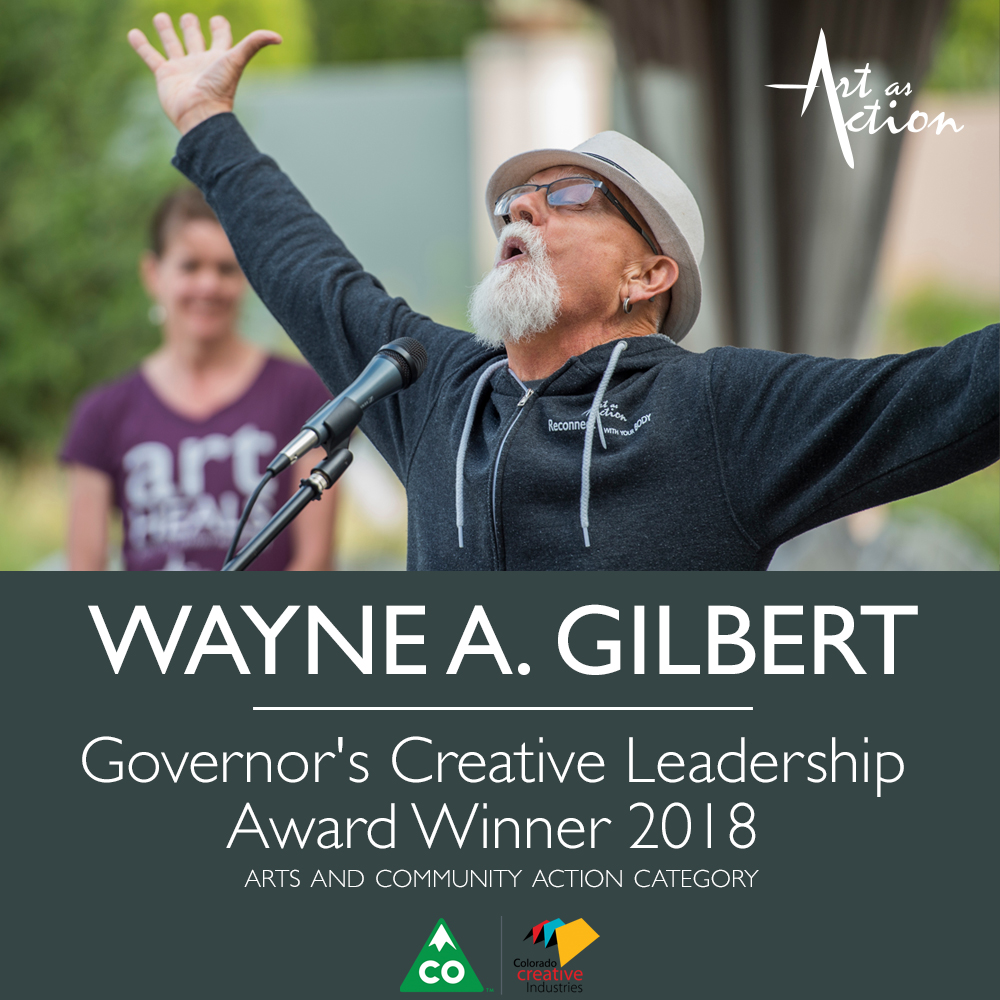 We are thrilled to announce that our own Artivist Sage Wayne Gilbert is being awarded the Governor’s Creative Leadership Award!

This award honors community members who have demonstrated a significant commitment to Colorado’s creative landscape through civic leadership and volunteerism including advocacy, vision, collaboration and innovation.

Wayne won in the Arts and Community Action category for individuals that have demonstrated selfless service, inspired others to take action and/or catalyze change in their community using the arts.

The winners were honored at an awards luncheon on May 11, at the DoubleTree by Hilton Hotel in Greeley in conjunction with the 7th Annual Creative Industries Summit. Before attending the awards ceremony, Wayne and Sarah presented “From Disorder to Dancer” at the Summit. 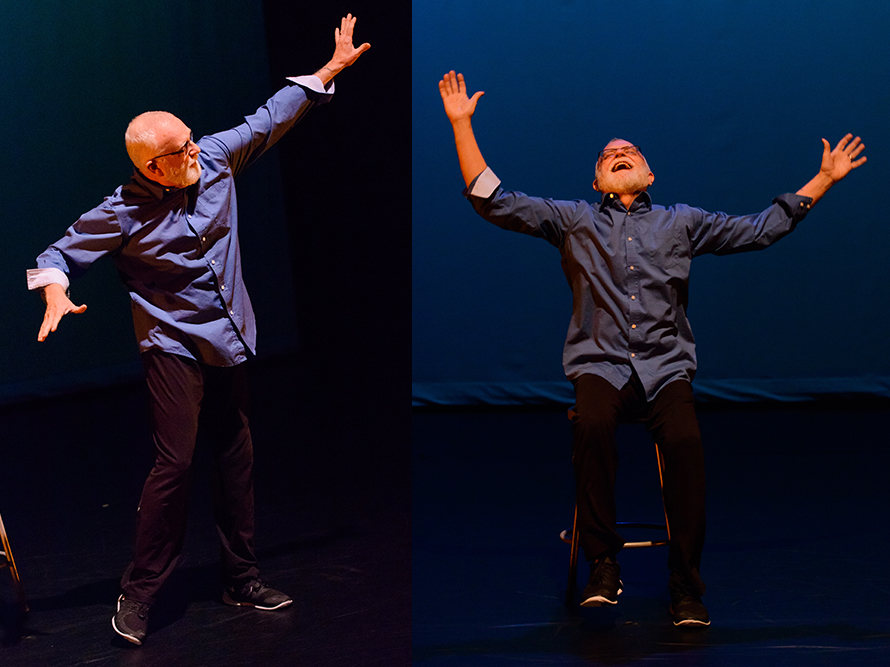 Here are some of the testimonials that were included in Wayne’s nomination:

“Wayne Gilbert has had an extraordinary impact on the Parkinson’s community. Through his poetry he has given the courage to those living with Parkinson’s to step out of the shadows of a devastating disease to live life fully and with greater exuberance.  As a dancer, he leads the Parkinson’s community as a volunteer and by example, to challenge the tenets that Parkinson’s disease creates limitations; instead he has taught those living with Parkinson’s that there are now new opportunities to engage life differently.  Wayne freely shares his knowledge, expertise and passion to educate and engage others.  Through his poetry he shares the truth about and the hopes of living with Parkinson’s.  While not always easy, Wayne is continually advocating for and promoting awareness of this devastating chronic disease.  His tools are dance and poetry; he graciously shares these skills and his story.  Wayne is a rare individual in the Parkinson’s community.  However, he is always looking back to help the next people in line.” – Cheryl A. Siefert, former Executive Director, Parkinson Association of the Rockies

“I remember the first time I heard a recording of one of Wayne’s performances. He is always a captivating and talented performer but as he was talking about a particularly rough day living with Parkinson’s disease, he crafted a description of the ruthlessness of gravity.  It was a perfect image and as he illuminated some of the aspects of life with Parkinson’s, I was reminded of the power of art to convey things that sometimes slip through the cracks of day-to-day life. Art is a really important part of our understanding of humanity and Wayne just has a way of capturing his little piece of humanity and sharing it with the rest of us. Our state is very fortunate to have an artist of his caliber in our midst and our Parkinson’s community here in Colorado is extremely proud of his contribution.” – John Dean, Parkinson’s Expert and Entrepreneur

“Wayne shows others the way to their own creative potential through the passion and humanity of his own creations.  He is a true renegade and revolutionary in his work while maintaining true openness and accessibility as a collaborator, teacher and performer.  Wayne is supportive and encouraging, all the while expecting the very best from everyone who crosses his path.”  – Sarah Leversee, niece & Artivist collaborator

“Wayne Gilbert is an essential voice in Colorado literature, both as a writer and as an educator.  As one of his former students, Wayne encouraged me to take my writing seriously and to approach my creative life with courage and vision and he has worked tirelessly to inspire generations to do the same.  Wayne is an advocate for his students, even beyond the classroom, and inspires his audiences to listen earnestly and engage with his innovative poetry in a way that leaves them all transformed.  He is an important leader in the poetry community, sharing work and bringing people together from different backgrounds and building bridges between them.  Simply put, Wayne Gilbert is an absolute treasure.” – Suzi Q. Smith: Poet, Mother, Activist | Poetry Slam, Inc. | Youth on Record

“Wayne’s spoken word and poetry truly capture what it is like for those of us with PD.  His expressive way of prose and his ability to capture the essence of what it’s truly like to live with PD is exquisitely accurate. He continues to amaze me with his poetry, his heart and his ability to dance despite his PD. He has been a gift to me.” – Karen Talcott, Patient Advocate, Movement Disorders Clinic

“Wayne has taught me that by serving others we are truly making our World a better place. I know the men at my prison have been changed because of what Wayne has brought them–the gift of writing poetry and discovering their inner talk can be a beautiful and comforting thing.” – Sylvia Uhl, Sterling Correctional Facility

“Wayne has pushed our group through his determination to create art, and grow through the creative process. His enthusiasm for working collaboratively, and fostering ideas, makes our creative process what it is today. If you’ve ever had the pleasure of talking with Wayne, then there is no doubt you have experienced the joy of hearing one his, “Yeah man!” hand grab celebrations. Writing scenes, when you have this to help support your creativity, is remarkably satisfying. Us In a Box would not be what it is today without the likes of Wayne Gilbert.” – Annell and Brennan Weissenbuehler, Us In a Box Theater Workshop

“Wayne’s commitment to Art as Action has been unwavering since inception.  His contributions have been through his vision, his heart, his perspective, his acceptance and, most important, his Artivism.  Wayne is a leader and a follower all in one.  He knows how to take the reigns and when he needs to follow another’s lead.  Wayne has helped Art as Action in both function and reach.  His generosity has been integral to everything Art as Action is and what it will become.” – Chloe DiVita, President, Art as Action

“Taking his creative writing class was one of the most important and formative things that happened to me as a young poet. Wayne was doing the work of a Laureate without a title and he did it for decades. He taught me that, that a poet needs to live up to there words and turn they poems into action calls. That’s how Wayne performs too, it’s visceral and inspiring. His poem is sheet music and your body is a trumpet.”  – Ken Arkind, Poet

Join Wayne & Art as Action at the intersection of performing arts, (dis)ability & creative potential – donate to our annual fundraiser!

Art as Action brings people together at the intersection of dance, (dis)ability and creative potential.